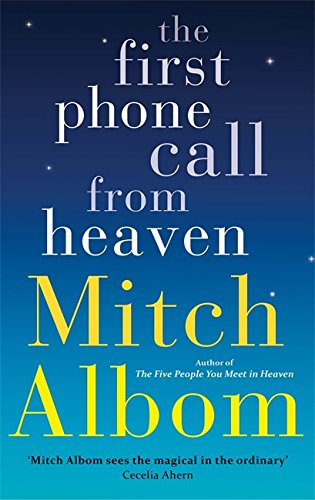 Being an ardent reader of Mitch Albom’s works, this was a book that I was very eager to read when I first found out about it. Then somewhere along the line, as I was waiting for it to be released, I sort of forgot about it (oopsies). Fortunately, when reacquainted with it at the library, I added it to my pile of books and hurried straight to the check out counter.

In a nutshell this story is about how a few residents of a small town start receiving telephone calls from the dead. Naturally, the question of whether this is the greatest miracle yet or just some elaborate hoax arises. Sully, a grief stricken single father, is determined to find out the truth.

Like all of Albom’s other books I’ve read, I thoroughly enjoyed reading this one. It was emotional, spellbinding and simply amazing. Normally I don’t like too many characters, but it seemed to have worked perfectly within this book. Not only was the range of characters presented fascinating, but also the diversity of emotions and thoughts of each of these characters – especially the ‘chosen’ ones as they experienced the same phenomena.

“No soul remembered is ever really gone”

For me, all the storylines were interesting in their own way as each character had been properly explored and fleshed out. Also, the way Alexander Bell’s history was interspersed was a nice touch and added something different to the book.

The mystery element was nifty, but more so was the test of belief and faith that the characters went through. The emotional confusion the characters go through as a result of this is masterfully depicted. The plot moves at a fast pace all the while capturing the greed of the media and mass hysteria.

“Desire sets our compass, but real life steers our course.”

On the whole, this was an emotionally charged book and well worth a read regardless of faith, belief or religion. It’s a heartfelt read of faith, forgiveness and trust. Plus, I’ve never read a book before that had so many beautiful quotes (which is always a delight).

This was a book I was very excited to start reading. The premise ticked all the right boxes and I honestly thought to myself ‘what’s not to like?’ Turns out, there was quite a bit! Much to my surprise, I ended up abandoning the book after a while. (Normally I like to stick it out, but there are just way too many books out there and life is too short to spend time on books that don’t float my boat).

The story follows Henry Wilt, someone who has just been passed over for promotion yet again. His home life does not seem any better; married to a domineering wife who has bouts of enthusiasm from yoga to the trampoline. Even though Wilt is helpless about his work situation, the same cannot be said about his wife, at least in his imagination. Day by day, his murderous fantasies grow wilder and more concrete. After a party goes awry and several embarrassing situations ensue, Wilt finds himself putting one of his wilder fantasies in to effect.

If I could only use one word to describe how I felt after reading this, the word would be baffled. I was so confused at the humour in this book and at what Sharpe was trying to say. I understand to a degree that the whole book was supposed to be a satire of the women’s rights and the liberation movement. However it just felt a bit over the top, not to mention a tad insulting.

None of the characters were particularly likable. Wilt came across as a pretty pathetic character, lacking in personality and energy. His character was not engaging in the least. For me, he didn’t really work as a protagonist. Basically, he certainly isn’t someone who I would want to read about. His wife, Eva seemed to have a bit more of a personality, which when compared to Wilt’s lack of, isn’t exactly hard. Yet, this wasn’t necessarily a good thing. She seemed to be easily influenced by other people, without thinking things for herself. Other characters included Sally, who came off as a nut job and her husband Gaskell.

Overall, the humour was on the crude side for me. Plus, the plot was nowhere to be seen; I caught fleeting glimpses of it, but it wasn’t fast paced enough. In the end, I just gave up and left it. Needless to say, I would not recommend it.