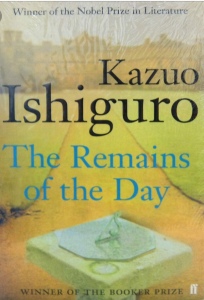 The Remains of the Day – just another book that has been on my ‘to read’ list for yonks. Yet I’m honestly glad that I waited this long to read it – It gave me a chance to truly appreciate the intricate subtlety a hell lot more and to understand what this story was trying to convey.

The introspective nature of the book was simply beautiful as was the writing itself. In many respects the narrative does not reveal much on the surface, but rather gives space for the reader to come to their own understanding and conclusions. Despite not having a plot per se, The Remains of the Day provided a wonderful insight to life in a country home between the two wars, focussing on what it means to be a butler of the highest standards, with particular emphasis on the concept of ‘dignity’ both within and outside the profession.

The continual flawless weaving between the past and present was incredible. The introspective nature of the narrative felt like Stevens and myself were having a conversation (albeit a one sided one). Stevens’ character was clearly portrayed – a butler who puts his profession above everything else – someone who cannot (or perhaps will not allow himself) to shed his professional role in order to live for himself rather than his duty. This sometimes yielded comical results, with special regards to the whole bantering conundrum. But more so than not, it was simply heartbreaking. As a result, Stevens can be viewed as a tragic character. A character that ultimately forgets who he truly is.

It was intriguing to see the development of Stevens and Miss Kenton’s relationship as revealed by the various flashbacks throughout Stevens’ narration. At first I will admit that I was at a loss in understanding how Miss Kenton’s feelings went from platonic to romantic towards Stevens, given his (sometimes callous?) behaviour towards her. But then it dawned on me; it is all about the narration. By large, Stevens is a perfectly reliable narrator, but for some reason tends to brush past emotion, especially his own. There are a handful of instances scattered whereby other people have picked up on his emotions in passing, yet he has never made this the focus or fully acknowledged them (i.e. tears in his eyes when his father passed away).

I seem to have gone off track a bit. Coming back to the point about Stevens and Miss Kenton. Despite mentioning the growing friendship between them (which was clearly hinted at via the evening talks in the parlour), Stevens tended to give more attention to their quarrels and the steadiness of them drifting apart, rather then the uplifting interactions and moments shared between them. Perhaps he found these exchanges to be of little relevance, therefore did not include them.

A sense of regret underlined the narration, which came through more heavily towards the end. Regret that is (again) never fully acknowledged by Stevens as to do so would perhaps shatter him completely. Regret that would make him see that despite being the butler of the highest standards and having a most successful career where he personally met a handful of important people, in the end ultimately he was completely isolated. He never fully experienced love or even friendship.

“Indeed — why should I not admit it? — in that moment, my heart was breaking.”

In conclusion, this was an immensely powerful book that demonstrated the importance of experiencing life to the fullest instead of being wrapped up so much in one aspect. Otherwise, all that is left are a handful of memories that are tinged with regret, heartbreak and longing.