I was on the look out for a cosy murder mystery for a while before I accidently stumbled upon this series. In all honesty, I did not know what to expect, and as a result kept my expectations relatively low. Yet, Date with Death was delightful and the perfect read in so many respects. Whilst no book (in my humble opinion) can possibly be on par with Agatha Christie’s mysteries, this book certainly came close.

Being the first book in a series, it was not surprising in the least that the story tended to focus more on the characters and their relationships within the community of Bruncliffe, whilst dipping in and out of the murder mystery aspect of the plot.

Both Delilah and Samson proved to be extremely likeable and feisty protagonists with their own complicated pasts, which were revealed in small delicious snippets as the book moved along at a steady pace. Samson made for an intriguing character given his complex relationship with his father as well as his past with the police that was shrouded in mystery. Delilah, on the other hand was more of a straightforward character despite her somewhat complex relationship with her family, especially with Will. Tolpuddle was a welcome addition, making up the trio. I was also curious about the protagonists’ names – is this perhaps some kind of foreshadowing for the later books or merely a coincidence? (Guess there’s only one way to find out for sure)

Upon first glance, there seemed to be an abundance of characters to keep track of and of course not forgetting their relations with the other characters presented. However, after a while, this did not seem so daunting and soon as a reader, I was able to take it naturally in my stride. At times, I did have to stop for a few seconds and remind myself who a particular person was, but this only happened a handful of times, which was not too bad in all fairness.

Given that this is the first book, there is certainly room for development, however this was a promising start to the series. One of my favourite aspects (amongst many) was the originality of concept of a private detective teaming up with someone who runs a dating agency. Additionally, there was a little bit of everything within this cosy story – humour, raw emotion and tension.

In a nutshell, this was a cosy murder mystery. Time and effort had clearly been spent on developing the characters, even the secondary ones. Although at times this may have been at the expense of the swiftness of the plot. This first book also helps to set the foundation for later books, as there are some shady characters whose intentions remain in the dark. An amazing book to start off the series, and cannot wait to read the next book in the series!

P.S. I would tell you an unemployment joke, but none of them work 🙂 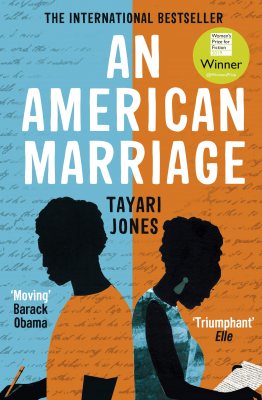 I remember adding An American Marriage to my list after hearing someone rave about it to their friends whilst I was browsing the yellow shelves in Liberia. I was intrigued, given how much enthusiasm was being displayed as well as the hype surrounding it from other readers. As with many books, it took me a while to come back to this one after adding it to my list.

An American Marriage looks at the intricacies of a marital relationship whilst also focussing on the other relationships that are forged through marriage, commenting on the fragile nature of these as the story progresses. Alongside the theme of relationships, there is an underlying commentary about race with emphasis on the prejudice in the justice system in America. The story hones in to the aftermath of a wrongful conviction as lives are changed forever rather than the process of the conviction itself.

The story is navigated through the perspectives of Roy, Celestial and Andre. Through each of their narratives, the writing was brilliant in depicting their emotions, thoughts and pasts that influenced their present decisions and feelings. Depth was added to each of the protagonists as snippets of their past was also explored within the narrative. Admittedly, at times, the sheer amount of detail felt unnecessary; it felt as if this was dragging down the present storyline, which ultimately took something away from the enjoyment of reading.

“In poker, you get five cards. Three of them you can swap out, but two are yours to keep: family and native land.”

The spectrum of relationships shown was amazing. The roles the different families played were fascinating to read about. As well as this, the dynamics between them was well written and felt realistic to a great degree, adding depth to the plot. The writing itself was beautiful.

Sadly none of the protagonists were particularly likable. I have no idea if this was done on purpose or not. Celestial was initially portrayed as a strong woman. A woman who knew her own mind as well as what she wanted. A woman who did not appear to be afraid of anything or anyone.

And yet, the more the story went on, I started to lose respect for her. At first, it was easy to sympathise with her. Her position was not an easy one and under no circumstances do I begrudge her for making the decision of no longer putting her life on hold and trying to move on after Roy had been sentenced. This was more the case as the years went by and the chances of an early release was diminished. Why and how Celestial had come to this decision was never explained which is surprising given its repercussions. It was unclear as well why after deciding to leave Roy, Celestial did not divorce him or why the other characters, especially Andre, never questioned this given that they wanted to start a life together. Her actions during Olive’s funeral were in many ways downright disrespectful as well. Moreover, her decision at the end made no sense given all that had preceded it but maybe I’m missing something.

Although Roy was more blameless given that a lot of the decisions taken were out of his hands, there was something about him that just didn’t sit right with me. Maybe it was when he confronted Celestial in what can only be described an aggressive manner. Nor did he help himself by essentially cheating on her either, both before going to prison and after being released.

Andre made for an interesting character as in some ways it could be argued that he followed his father’s footsteps as he decided to settle down with a married woman, whereas his father left his family for someone else. Despite that subtle difference, arguably the choice is within the same vein. Put short, Andre was a frustrating character as was his and Celestial’s relationship.

One aspect of the story that proved to be thought provoking was the idea of whether Celestial and Roy’s marriage would have been much different had Roy not been convicted. Given the tenuous nature of the relationship, it is pretty valid to say that the sentencing acted as a catalyst for the inevitable ending of their marriage.

Whilst an element of realism was added with the drama and reactions of other characters, there were parts of the book that were unrealistic. A prime example was the letters exchanged between Roy and Celestial at the start. The voices of the characters were indistinguishable and disjointed compared to the narrative. As said before, some of the decisions made were nonsensical and due to this, the ending felt rushed.

In a nutshell, due to the lack of emotional connection felt with the characters, as well as the decisions they made there was a distinct lack of pleasure when reading An American Marriage given that it was character driven rather than plot driven. I feel that I missed the deep message it was trying to depict (if there even was a message). It wasn’t a bad book per se, just wasn’t my type of read.

P.S. My friend told me that she hates revolving doors and is afraid that she’ll get stuck in them. I said, “You’ll come round eventually.”